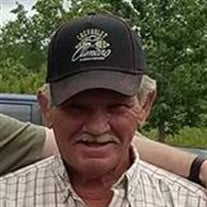 Robert T. Cooper, 73, of Seymour, TN passed away April 17, 2020 after a brief sickness. On November 14, 1946 Robert was born in Vonore, TN. After high school, he went on to have a career as a Bobcat operator in the construction business. He... View Obituary & Service Information

The family of Mr. Robert T. Cooper created this Life Tributes page to make it easy to share your memories.

Send flowers to the Cooper family.