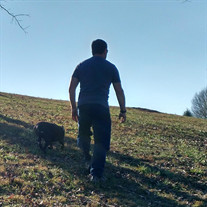 Martin Brian Shaper, of Maryville TN, passed away August 28, 2018. He was born on March 19, 1961 in Essex, England. Martin is Survived by his wife, Lisa Haynie Shaper; sons, Sam Shaper (Amy Baker), Ben Shaper (Lauren Martin), and Tom Shaper (Bianca Unwin); step-son, Cale Godfrey; ex-wife and friend, Sue Bryan Shaper; parents, Leslie and Iris Shaper; brother, Kevin Shaper (Katrina Ives); nieces, Kylie Shaper (Shailen Laxman), Marie Shaper, and Emma Bradford (Jon Bradford); Great-Niece and Great-Nephew, Ruby and Harry Bradford. Martin apprenticed and was educated in England in mechanical and electrical engineering. He was employed with DENSO as a technician in Maryville, Tennessee. Martin was a brilliant mechanic. He could repair or build anything. He enjoyed a hobby of buying vehicles deemed mechanically hopeless and often repaired them in a matter of days. He had a fondness for Corvettes especially. Martin took pleasure in going to Lake Tellico and delighted in boating, jet skiing, paddle boarding, or just relaxing on the dock. Martin's pride and joy were his boys, Sam, Ben, and Tom. He was so proud of their accomplishments. He missed them dearly, as they lived in Australia, but they were on his mind and in his heart daily. Simply the light of his life. Martin had a soft spot for animals. He kept water for the birds, fed the rabbits, and planned to build the squirrels winter houses. Of course his true four-footed love was Bailey. The rescued English Staffordshire Bull Terrior flown from Australia was Martin's constant companion. Unless he was at work, you would not see Martin without Bailey at his side. In deed, Bailey is a super special dog, still loved greatly by the family Martin left behind. Nothing written here will ever describe how much he is loved and missed. The absence of his smile is like the last candle blown out.

The family of Mr. Martin Brian Shaper created this Life Tributes page to make it easy to share your memories.

Send flowers to the Shaper family.