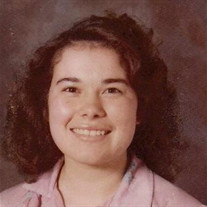 Leisha Renee' (Holman) Cobb, 53, of Maryville, fell into the loving arms of Jesus on March 30, 2019, at Blount Memorial Hospital. She was surrounded by her husband of 31 years, Peter Kent Cobb, her children, Desaray Atrell Juarez-Mora, Cherese Renee' Cobb, Chance Alexander Cobb, son-in-law Noé Juárez Mora, and her daughter-in-law, Edith May Cobb. She is survived by her grandcat, Queenie, and four grandchildren: Conner Noe Miguel Juarez-Cobb, Alex Blake Juarez-Cobb, Logan Armando Juarez-Cobb, and Wilder Donny Cobb. Originally diagnosed with end-stage renal failure on September 27, 2013, she courageously battled calciphylaxis, a rare but devastating disease that causes skin ulcerations and tissue necrosis. She was born to the late Delia Atrell Ellis, August. 29, 1965, in Dallas, Texas. Leisha attended Little Rock Central High School and became a Certified Geriatric Nursing Assistant working in Vero Beach, Florida, at Elsie Miller Manor before becoming a full-time homemaker. Leisha met the love of her life when she was 15 at the North Little Rock Church of God. After being separated from him for seven years because of her family, they tied the knot in 1988, traveling across the country before laying their roots down in East Tennessee. She was adored for her child-like faith and uplifting spirit. She believed that everyone had at least one good quality and sent motivational texts to her family, friends, and acquaintances daily. Her sense of humor "earned her the big bucks" and helped her forge friendships around the world on platforms like Instagram and YouVersion. A connoisseur of coffee who doused food with Texas Pete, Leisha collected owl and Hello Kitty figures. She spent her last few months binging on Animal Planet, Grey's Anatomy, and rooting for the Vols and Longhorns.

Leisha Renee' (Holman) Cobb, 53, of Maryville, fell into the loving arms of Jesus on March 30, 2019, at Blount Memorial Hospital. She was surrounded by her husband of 31 years, Peter Kent Cobb, her children, Desaray Atrell Juarez-Mora, Cherese... View Obituary & Service Information

The family of Mrs. Leisha Renee (Holman) Cobb created this Life Tributes page to make it easy to share your memories.

Send flowers to the Cobb family.