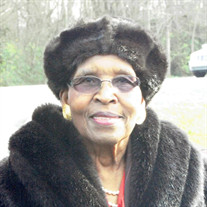 On Thursday, November 4, 2021, in the early morning, Mrs. Gloria Dean Henderson Carr transitioned peacefully to her Heavenly Home, at her residence in Rockford, Tennessee. On October 29, 2021, Gloria celebrated her 90th birthday along with granddaughter, Gloria Michelle Tate, her namesake who also shared her birthday. Gloria was surrounded by her children, grandchildren, and great grandchildren, as well as other family members and dear friends. Born on October 29, 1931, Gloria was the eighth child of the late Fred and Johnetta (Winton) Henderson in Alcoa, Tennessee. She was the last one of the Henderson children to enter their eternal rest. Gloria graduated from Hall High School and Knoxville Cosmetology School, where she earned her certifications as a beautician. On December 19, 1953, Gloria united in holy matrimony with her high school sweetheart, Stone N. Carr of Alcoa, who eventually became an ordained minister and pastor. Together they served several churches in the Alcoa and Knoxville areas for over 30 years. Rev. Carr preceded his wife in death on August 14, 2020, a few months shy of their 66th wedding anniversary. In addition to being a wife, mother and First Lady, Gloria made a career in the banking industry, and retired from Bank of Maryville in 1990 as Head Teller. Her warm and engaging personality made her well-known and liked by all her customers. During retirement Gloria spent her time exercise walking, reading, baking, caring for her friends and family who were ill, traveling and spending time with family. She also had great fun participating in plays and fashion shows. Gloria will always be remembered for her delicious pound cakes, her beautiful sense of fashion and style, her beautiful singing voice that she shared in many churches, her heart of generosity and service, and her welcoming spirit to everyone who entered their home. Gloria leaves her fond memories to be cherished by her daughters, Pamela (Charles) Tate Charlotte, NC, Gina Carr, Rockford, TN (also her devoted caregiver), and son Stanley Carr, Alcoa; grandchildren: Nicole Tate-Phillips, Glenside, PA, Brian (Melisa) Tate, Charlotte, NC, Gloria Tate, Charlotte, NC, Brandon Carr-Montano, Denver, CO, Brittany (Rob) Carr, Knoxville, Joshua Carr, Virginia, and Natasha Carr, Rockford; great-grandchildren: Jordan Phillips, Morehouse College, Atlanta, GA, David Phillips, Glenside, PA, Christian Carr of Knoxville, TN, Kai Elle Kate of Charlotte, NC, Corey and CJ Abram of Rockford, TN; sisters-in-law: Shirley (Cato) Clowney, Maryville, TN and Patricia (John) Watkins, Chattanooga, TN Odessa Carr, Louisville, TN, and Thelma Carr, Maryville, TN, and many nieces, nephews, and special friends. A special thank you to Hospice Services of Knoxville, caregiver Keisha Reed (CNA), and nephew Jerry (Rosemary) Hall. In respect of Gloria’s wishes, there will not be a public service. In lieu of flowers, she requested donations in her memory to her favorite charitable organizations: Shriners Hospitals for Children, St. Jude’s Children Research Hospital, or Operation Smile. The family would like to extend our heartfelt appreciation for the cards, gifts, calls, visits, and most of all prayers for loved on during her extended illness and all the loving expressions of sympathy during this time. Thank you to Cremation By Grandview of Maryville for your compassionate services.

On Thursday, November 4, 2021, in the early morning, Mrs. Gloria Dean Henderson Carr transitioned peacefully to her Heavenly Home, at her residence in Rockford, Tennessee. On October 29, 2021, Gloria celebrated her 90th birthday along with granddaughter,... View Obituary & Service Information

The family of Mrs. Gloria Dean Henderson Carr created this Life Tributes page to make it easy to share your memories.

Send flowers to the Carr family.