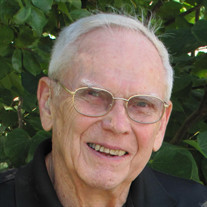 E. Richard “Dick” Randolph, 88, of Maryville, Tenn. passed away Saturday, August 12, 2017. Dick was born April 10, 1929 in Norristown, Pennsylvania, graduated from Freeport (Illinois) high school, and received a Geology degree from the Univ. of Wisconsin, where he was a member of the track and cross-country teams and earned two NCAA All-American awards. After college he joined Cleveland-Cliffs, Inc. and worked in the company’s Upper Peninsula (Mich.) and Minnesota mining operations. Dick moved his growing family to new locations throughout the Great Lakes region as he progressed in his career. After joining The Dow Chemical Company he received several awards related to service and training. Not only did Dick love teaching, but he was constantly learning, researching new topics and keeping informed of current societal, scientific and technological events. One true passion of his was the outdoors. He loved hiking, camping and sight-seeing in all parts of the U.S., especially in the Great Smoky Mountains National Park. He moved to Townsend, Tennessee after his retirement from Dow Chemical in 1991, spent his summers at Houseman Lake near Baldwin, Michigan, and continued his love of exercise and outdoor activities throughout his life. He relished watching all sports and was especially fond of the Lady Vols basketball team. Dick was honest, ethical, courteous and considerate in both business and personal interactions, and enjoyed being involved in civic and church activities. He was a faithful husband to Betty for 66 years. Dick is preceded in death by his parents, Eskil and June Randolph and his brother, David Randolph. He is survived by his beloved wife, Betty J. Randolph, his children, Susan J. Kropscott, Stephen R. Randolph (Patti), James D. Randolph (Claire), Jeffrey S. Randolph (Diana) and Mark D. Randolph (Monica), 13 grandchildren and 4 great-grandchildren. Throughout his life, Dick demonstrated an enviable perseverance through the hardships of many illnesses, without complaint and with a pleasant demeanor and a positive attitude. “Dad, you were a naturally-skilled teacher, and you always took the time to explain things with patience and clarity. You respected everyone unconditionally, and were always interested in others’ lives. You were the epitome of a good neighbor. You taught honesty and ethics to all of us. Words can’t fully describe what a uniquely good and special person you were. You were my example, my mentor, and my hero.” There will be no services at this time. In lieu of flowers, donations may be made to the Appalachian Bear Rescue, P.O.Box 364, Townsend, TN 37882; (865) 738-3683; http://appalachianbearrescue.org/

The family of Mr. E. Richard "Dick" Randolph created this Life Tributes page to make it easy to share your memories.

Send flowers to the Randolph family.