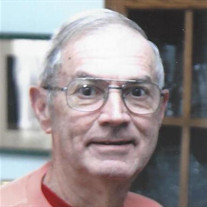 David Ronald Krick, born Feb. 22, 1943, was relieved of his pain and suffering and called home by our gracious Almighty God Oct. 17, 2015. At the time of his birth, the family lived in Allentown, PA, but moved to Orlando, Fl, in 1953 where they became charter members of St. John Lutheran Church, LCA. In 1961 Mr. Krick joined the U.S. Air Force subsequently serving in Plattsburg, NY, Japan, Hawaii, Egland AFB in Pensacola, FL, and Vietnam. In the military he received the grounding for his career in aircraft maintenance. This career took him to Australia for two years where he worked for a helicopter company which served ocean-going oil drilling ships, mines in New Zealand, Borneo, and Indonesia. In 1972 he came back to Orlando and worked for a Sikorsky rebuilding shop that re-outfitted helicopters for Sheriffs, ambulances, even a camper and more. In 1974, he married Martha (Mot) M. Brown of Orlando. Two years later they moved to Mountain Home, AR. Eventually joining First Christian Church Disciples of Christ where he met Jesus as his Lord and Savior then, he became involved and served on two Lay Witness Mission teams. St. John Lutheran Church welcomed David and Mot back into their membership in 1979. Between '79 and 2000, they both sang in the adult choirs and Ensemble of St. John, were mentors to Jr. High Youth Group and Confirmation classes, graduated from Christ Clown College, David with honors, and David served on Via de Cristo teams. Mr. Krick's career in aircraft maintenance continued when he returned to Orlando: first, in private industry; next with the U. S. Army Reserve, retiring in 1995; then in commercial airlines. Mr. Krick is survived by his wife of 41 years, Martha, two brothers Gary Benjamin and Dennis Alan, sister-in-law Theresa Marie Fackler Krick, four nieces, three nephews and extended family Todd Edward Alex Nelson, Amy Jean Rogers Nelson and sons Dalton Hans Lee Nelson and Austin Ryan Nelson. In lieu of flowers please contribute to ALS Association, P.O. Box 40244, Nashville, TN, 37204. Memorial Service to be held at 1pm, November 21st, 2015 at New Providence Presbyterian Church in Maryville, TN.

David Ronald Krick, born Feb. 22, 1943, was relieved of his pain and suffering and called home by our gracious Almighty God Oct. 17, 2015. At the time of his birth, the family lived in Allentown, PA, but moved to Orlando, Fl, in 1953 where... View Obituary & Service Information

The family of Mr. David R. Krick created this Life Tributes page to make it easy to share your memories.

Send flowers to the Krick family.