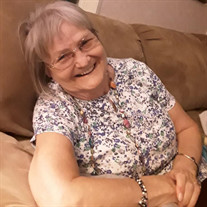 Adrianna J. Lemons (80) of Maryville, TN passed peacefully on August 28th after a long illness. Born of Clifford A. Jensen and Alfrida (Velie) Unger in Shawano, WI. She is preceded in death by her parents, stepfather, William &#8220;Pop-eye&#8221;... View Obituary & Service Information

The family of Adrianna Jean Lemons created this Life Tributes page to make it easy to share your memories.

Send flowers to the Lemons family.